Well, you won’t be shocked, probably. And I am sorry for that.  It would be nice if there was still some innocence left in the world.

But let’s not get maudlin.  Background: Barbara Comstock, Republican candidate for VA-10, is of the (accurate) opinion that her opponent John Foust is a male chauvinist pig:

END_OF_DOCUMENT_TOKEN_TO_BE_REPLACED

Cassaundra Cooper and Yolanda Costner, in separate complaints, allege Arnold inappropriately touched them and made lewd and vulgar comments in numerous incidents over several years. Arnold is a veteran legislator from Sturgis.

END_OF_DOCUMENT_TOKEN_TO_BE_REPLACED

Rather late to the party, they are.

The Democratic National Committee will vote on a resolution this week calling on San Diego Mayor Bob Filner to resign, ratcheting up pressure on the embattled Democrat who has been accused of sexually harassing multiple women.

Question Two – because we all know that, in the unlikely event that anybody in the Media ever has the nerve to actually ask that question of Bill Clinton, Bill Clinton will promptly say “No:”

END_OF_DOCUMENT_TOKEN_TO_BE_REPLACED 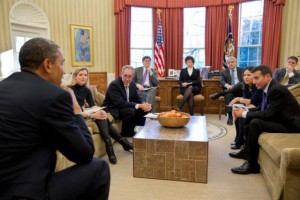 There’s only one real response to that, of course: END_OF_DOCUMENT_TOKEN_TO_BE_REPLACED

Spoiler warning: it’s because the Democrats use the concept of “acceptable losses.”

Consider the story of Jim and Patrick Moran… and let us not make this a Democratic/Republican thing. Instead, let us go foreign: imagine that a report had come out that the son of an Australian* politician had been caught viciously beating his girlfriend in a drunken rage. The incident was witnessed by police, who made an arrest (getting assaulted themselves in the process); the victim went to the hospital, and allegedly treated for a skull fracture and a broken nose. Now also imagine that the politician HAPPENED to be a senior figure in his political party, and who HAPPENED to belong to a federal-level legislative body that HAPPENS to have direct oversight over the municipality where the attack took place; and that the politician’s son just HAPPENED to be able to plead down from felony assault to regular assault and probation. And, to cap it all off… the victim is in classic fashion sent out to claim that it was all an accident – and then the politician declares the whole thing to be an ‘embarrassing situation.’

If all of this happened on the other side of the world, do you think that there would be anybody credible – on either side of the American political spectrum – who would not agree that the politician needed to be investigated?

For a given value of “his own.”  Short version of this Jay Carney clip: Hilary who?  Hilary Rosen?  The White House has so many people coming through, after all…

Somewhere, Robert Gibbs is nodding to himself and thinking, Yes.  The chrysalis has fallen away to reveal… well, a prime example of Dermatobia hominis (human bot fly). END_OF_DOCUMENT_TOKEN_TO_BE_REPLACED

I believe that the technical term for this would be ‘glass ceiling.’

Via @mkhammer comes this latest example of Do As I Say, Not As I Line-Item Budget from the Obama administration. Executive summary: the Obama administration is allegedly paying its female staffers roughly 18% less than its male ones.  I’m using the term ‘allegedly’ because the original report did not separate out staffers by gender, forcing “some assumptions to be made based on the employee names” (as the Free Beacon put it); I’m reporting it anyway because Barack Obama was – well, he wasn’t actually notorious for it in 2008, but not for lack of trying.  Anyway, he had a real problem with this sort of thing as a Senator, and it’s not exactly clear that being President has taught him to improve his ways.

More at Hot Air; I don’t know if Allahpundit remembers  that Ed Morrissey was on this story in 2008, too.  Probably not: both RedState and Hot Air have published a lot of material since then.  God knows that this administration seems determined to keep feeding us these opportunities to point out its flaws… END_OF_DOCUMENT_TOKEN_TO_BE_REPLACED