Found here. Short version? They got it, as they said, done.  And it took a good bit of effort, too.

I admit, I laughed at this: “If a courageous legislator introduced a repeal [of right-to-work] bill into Congress, unions could demand that their federal representatives support the bill or risk the enactment of state laws protecting workers against arbitrary termination.” It’s from a labor law professor at Colorado State who seems to think that the labor movement can successfully threaten to pass enough state legislation to spark a federal law. 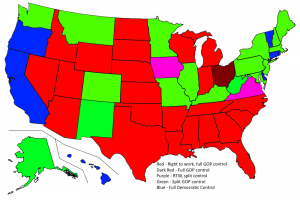 (Data via here and here) END_OF_DOCUMENT_TOKEN_TO_BE_REPLACED

(Via Althouse) Futile because – and this is something that the Badger Herald unaccountably forgot to mention – the courts keep making it clear: right-to-work laws are constitutional.  And the courts will inevitably do so here, as well. Like it or not, the unions are going to have to learn to accept that elections have consequences.  Particularly when you’ve picked the wrong faction. END_OF_DOCUMENT_TOKEN_TO_BE_REPLACED

This is what democracy looks like: “Overhauling more than a half century of labor law in Wisconsin, Gov. Scott Walker on Monday signed so-called right-to-work legislation banning labor contracts that require private sector workers to pay labor fees.”  …and I don’t think that the rest of the post can live up to its first six words, so I’m just going to stop here. A man’s got to know his limitations.

Walker. RT @charlescwcooke: And there it is. Wisconsin becomes the 25th state in the union approve right-to-work. http://t.co/Nx3RrTvBpt

62-35, according to the linked tweet.  The AP has since confirmed, noting rather primly that the right to work bill passed without Democratic support. Which, of course, suits everybody involved.

Moving on: the right to work bill will be signed Monday. Expect the usual screaming over the weekend. Just not… as intense as in the past, alas. Perhaps the Activist Left has learned a harsh, yet valuable, lesson on the merits of knowing when they’ve been whipped back to their kennels? I would have guessed ‘no,’ but I suppose that pain really is a wonderful teaching tool.

Via comments, this is just sad.

A Pennsylvania lawmaker claims the Yuengling brewery has been banned from donating free beer to the inaugural ball of Pennsylvania Gov.-elect Tom Wolf (D).

State Rep. Mike Vereb (R) said during a radio interview Thursday that he thought Wolf’s transition team was punishing Yuengling because the company’s president, Richard L. Yuengling, has supported so-called right-to-work laws in Pennsylvania, which would make it more difficult for labor unions to organize.

END_OF_DOCUMENT_TOKEN_TO_BE_REPLACED

Whether or not a non-elected administrative board wishes otherwise.

The Michigan Legislature’s right to create a law that bans mandatory union membership trumps the authority of a state agency that oversees public employment, an appeals court ruled on Thursday.

The state legislature passed the “right to work” law in December amid union protests in Lansing, dealing a stunning blow to organized labor in the state that is home to U.S. automakers and the symbol of industrial labor in the United States.

The Michigan Court of Appeals ruled 2-1 that the legislature had the authority to create the law that makes union fees voluntary because it has the constitutional right to “speak for the people on matters of significant public concern.”

END_OF_DOCUMENT_TOKEN_TO_BE_REPLACED

Hey, do you want to see what it looks like to have your planned judicial delaying tactics trip, fall, and face-plant before it even clears the door?

…Yeah, sorry about the metaphor, but sometimes the convoluted ones are really the only ones that fit.  Case in point:

Opponents of the state’s new right-to-work law promised a challenge of the controversial bill that passed the lame-duck Legislature in December.

But those challenges may become a moot point since Gov. Rick Snyder asked the Michigan Supreme Court on Monday to review the bill and determine whether it passes constitutional muster.

END_OF_DOCUMENT_TOKEN_TO_BE_REPLACED

You know it’s bad when a group decides to emulate the Old East German response to people voting with their feet:

The president of Michigan’s largest union is instructing officials to prepare to sue its own members, according to a leaked memo issued after the state adopted right-to-work laws in December.

Steven Cook, president of the Michigan Education Association, circulated an email to local unions officials and staff instructing them to monitor revenue streams in light of the right-to-work laws, which are set to go into effect on March 27, 2013. The law allows workers to opt out of union membership unless they have an existing contract with their employer.