But I do like the Washington Free Beacon, which created this*.

END_OF_DOCUMENT_TOKEN_TO_BE_REPLACED

Yeah, sure, from their plumage they’re apparently Code Pinkers, which is a group that I avoid comparing to pond scum mostly because pond scum doesn’t deserve the comparison, but since when do cops get to put hands on the throats of people who aren’t, you know, attacking them or anything?

I mean, seriously. You take a swing at a cop, the cop smacks you to the ground, that’s how it works. No beef there. But was this really proper procedure? – I ask mostly because I might feel like dancing at the Jefferson Memorial some day, and the last time I checked there are supposed to be some pretty hefty Constitutional protections in place to allow me to do it.

I think that the US Park Police needs to review/update its training procedures.

PS: To reiterate… to hell with Code Pink. I hope that they win their court case, get a buck in damages, and have to pay their own court costs.

These would be the four Democrats [Sen. Barbara Boxer (D, CA); Rep. Henry Waxman (D, CA-30); Rep. Dennis Kuchinich (D, OH-10); and Rep. Raul Grijavla (D, AZ-07)] who provided letters of introduction and support to the pro-terrorist groups Code Pink/Global Exchange in 2004. Those groups used these letters to facilitate their delivery over a half a million dollars’ worth of aid to terrorists in Fallujah actively fighting American troops; which is, by the way, treason by any reasonable interpretation of the US Constitution.

Note that I am not accusing these Members of Congress of committing treason, merely the American members of Code Pink and Global Exchange. Rep. Waxman – one of the Congressmen involved – claims that he was not aware that the letter of introduction and support that he provided would be used in support of ‘insurgents*’ (by which Waxman means terrorists shooting at American and allied forces in Iraq); this ignorance is appallingly possible, given that Waxman is a Democrat, and thus defaults to being appallingly pig-ignorant on national security, national defense, and foreign affairs. No word as of yet what the other three Members of Congress were thinking – or, indeed, whether they were thinking at all. No doubt if asked they will likewise deny treasonous intent on their part: it is generally preferable to be thought merely abjectly stupid, instead of guilty of a crime that technically carries the death penalty.

After the fold is a list of the Fallujah Four – and their opponents in the upcoming election. For while being duped by pro-terrorist groups like Code Pink and Global Exchange is not treasonous, neither is it something to reward with a position of trust and responsibility in the United States government. END_OF_DOCUMENT_TOKEN_TO_BE_REPLACED

This report of a lie-in by pro-victory in Iraq protesters at a fundraiser held for Jerry Brown by notorious terrorist sympathizer Jodie Evans highlights a very, very serious set of questions involving not only Brown’s associations, but also his own motivations. The fact that Brown is attempting to get Code Pink’s money like this leads to various questions:

END_OF_DOCUMENT_TOKEN_TO_BE_REPLACED

Ace of Spades HQ gives bravery props to the Speaker for snapping back at the Code Pinkers; I don’t.  A mad scientist who can’t face her own creations is no mad scientist at all.

And ‘created’ is meant deliberately. Code Pink was carefully nurtured and developed to spew hatred on command towards the Republican party in general, and George W Bush in particular, the better to elect Democrats who would turn around and not end the war, but would loot the treasury blind. And so it was done; but since we don’t have an euthanasia program in this country, the Democrats instead fairly callously threw them and the rest of the antiwar movement aside like a used prophylactic once they were no longer needed*.

And now they howl and throw things at Democratic functions. I wonder what the next step’s going to be? And I wonder whether Nancy Pelosi will ever accept responsibility for anything… untoward… that happens accordingly?

*The fact that I despise the antiwar movement myself, and am currently enjoying watching flail around literally howling their betrayal (listen to the audio on that YouTube video again), doesn’t actually excuse the Democrats’ behavior. It merely adds to the antiwar movement’s humiliation.

They can write things like this (note: link safe):

The recent shootings at Ft. Hood and the resignation of top Foreign Service officer Matthew Hoh demonstrate how even our military officers are opposed to US strategy in Afghanistan.

PS: The Democratic Party has gotten some money out of Code Pink, over the years. 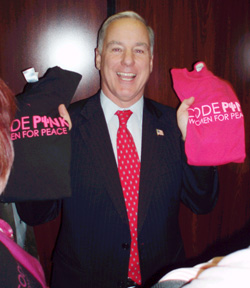 They should give it all back now, please.

No reason that he should, of course. Anyway, for your amusement, watch this deeply symbolic, iconic, and thoroughly entertaining exercise in antiwar impotence:

I’d note that the antiwar activists seen here had fallen from their high place, except that they were never particularly high up to begin with. And thank God for that, huh? Imagine the disaster that we’d be facing today if we took people like those in Code Pink seriously.

You can trust me on this, you know. I am apparently a smart guy. But if I’m so smart, why ain’t I rich?

Because nobody’s hitting the tip jar, that’s why. But this code should work now:

Or, the neocons induct its newest member.

In one of the more memorable television moments yesterday, the lunatic Democratic fringe group known as Code Pink got smacked in public for being, well, Code Pink:

I understand that there are some people for whom rational discussion is not an appropriate means of expressing themselves. You are entitled to do that in general, but not in a way that interrupts those of us who are trying to have rational discussions… I do not know how you think you advance any cause to which you might be attached by this kind of silliness.

END_OF_DOCUMENT_TOKEN_TO_BE_REPLACED

Or Code Pink’s, for that matter. Or anybody else who thinks that hanging with them is neat.

Not then.
Not now.
Not ever.

Iraqis vote in landmark elections
Iraqis are electing new provincial councils in the first nationwide vote in four years, with the Sunni minority expected to turn out in strength.

After a slow start, correspondents said voting was brisk, including among Sunni Muslims, who largely boycotted the last elections.

The vote is seen as a test of Iraq’s stability ahead of a general election due later this year.

Security is tight and thousands of observers are monitoring the polls.