Well, we all know I’m a sucker for Baen E-ARCs. Hell, I’m surprised they’re not sending me a heads-up every time one that fits my buying habits becomes available. Because obviously I’m checking every couple of days.

1637: THE PEACOCK THRONE. This one is about India. It should be fun!

Spent a bit of it trying to figure out the best breakpoint for an alternate timeline where, for reasons never really explained, nation-states above a certain population level tend to break in half.  I was using the USA for my target number — I wanted to get about five countries out of it — but that leaves a paradoxical amount of too many countries being affected, and not enough.  Turns out that using a number of about 70,000,000 million leaves Europe (outside of Russia) pretty much intact, and gives India/China both just not enough countries that I’d have to do something more than make up lines on a map.

So, yeah, I’ve been playing with spreadsheets.  Ah, the glamorous life of the amateur gaming writer.

Found here. I put it up there for two reasons: one, I needed the practice in embedding images to Patreon posts.  The process is not entirely intuitive.  Second, it’d be awesome if I made it through the next checkpoint, which would be the point where the monthly short stories hit 3K words.  So, hey, tell your friends!  Buck a month is all it takes, folks.

Short version: it would probably have worked out better for everybody concerned, except for Castro and Batista.  No statehood, though.  Both of this sound… about right, really.

I understand that the alternate history genre appears complex to people who aren’t, well, steeped in its little ways and assumptions. That’s fine; those of us who are fans of alternate history are used to folks who – through no fault of their own – don’t really groove to such things. Even fellow science fiction readers.

But for the love of everything that’s holy: if you’re trying to sell a particular book in the genre, compare it to something that fits. END_OF_DOCUMENT_TOKEN_TO_BE_REPLACED

It was a short story, based on the premise that Marxism actually worked and set in an alternate, mirror-universe end of the Cold War (so it was written in the 1990s*). It got anthologized, so it was mainstream; and I thought that I knew the title (“Dispatches from the Revolution”), but that’s an entirely different short story.

Help? This is driving me nuts.

*It held up NYC as NOT being a hellhole (specifically because the City was more socialist than the alternate’s USA), so the story clearly predates Rudy Giulani’s tenure as Mayor (and subsequent repair) of the City.

I’ll be happy when November hits and I don’t feel quite the same urgency about political blogging, either.  Alas, this is the busy season for that sort of thing; although I actually had a GURPS thought for the first time in months the other day*…

END_OF_DOCUMENT_TOKEN_TO_BE_REPLACED

I’d normally link to where I saw this, but it had… objectionable tags. 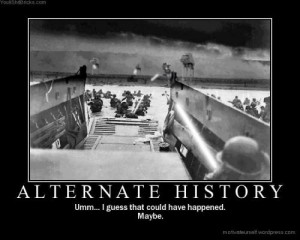 These five being part of a nifty little speculation in alternate history over at io9. Each one of those represent the people who would have become President if (respectively) Tyler, Andrew Johnson, Wilson, FDR, and/or Nixon had died, gotten impeached, and/or resigned at a reasonably plausible moment. Of the bunch of them, I think that I like the possibilities of Thomas Riley Marshall best; in fact, he’ll be useful for something in the back of my head.

If you think that this is a weird discussion… well, it is. But imagine American history without Teddy Roosevelt

or Chester A Arthur

as Presidents – which could have very easily happened – and you might see the possibilities there.

“This” being the alternate history book WINTER OF OUR DISCONTENT: The Impeachment & Trial of John F. Kennedy, Written by Harry Turtledove & Bryce Zabel, which postulates as its divergence point the failed assassination of JFK. They’ve got three chapters up at the site, and it looks like a pretty good story – but there hasn’t been any action on this for almost two years, which seems a shame. Harry Turtledove

‘s a master at the genre, and we’re about due for some serious reexamining of the Kennedy era.