This says it all, really: “Dragon Age 4 has been a long time coming and BioWare still doesn’t have much to show for all the years it has spent developing the RPG. And even though there still isn’t much to reveal about the game, the team gave an update on its development, which coincided with another lead leaving the team.“

I know the franchise is dead, or at least better off that way. ComingSoon does, too. Shoot, even Bioware itself must realize this by now. So… kill it. Kill it, and Mass Effect, and have done with the whole sorry affair.

Dragon Age: Hard in Hightown is an elaborate Dragon Age II joke.  One of the NPC companions — one of the cool ones — is a Dwarf named Varric who writes lurid novels, when he’s not shooting a crossbow.  One of these novels was called Hard in Hightown, and you would get references to it in-game, because Varric put everybody he knew in the book, including all your other NPC companions and, oh yeah, your own character.  So somebody decided to actually publish the book; and Mary Kirby got tapped to, ah, ‘co-write’ it.

The entertaining part?  I read part of it before I handed it off to my wife (she’s much more of a Dragon Age fan than I was).  It was not half bad, what I read.  Got a decent pulpy mouth-feel to it, really. I respect that.

WashingCon schedule here.  My Saturday game (Dragon Age) here, and my Sunday game (TimeWatch) here. Gonna be a busy weekend, but that’s OK. To be honest, I’m not going to know very many people there anyway. 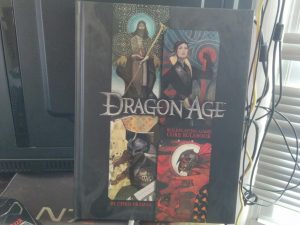 I’m going to look over it for a week or so and decide whether to run a game in it for WashingCon. I’m not sure that I’m familiar with the actual rule set that the Dragon Age RPG uses, for one thing. I also don’t know whether I want to run a slugfest, which may be the tacit default option here.  I’ll mull it all over for a bit.

Interesting that the Inquisitor is apparently ‘officially’ female.  Which only makes sense, of course, but it’s still interesting that Bioware decided to be public about it. And it’s gonna be the last one for this game, too.  Surprise, surprise.

Rumor has it the DLC drops Tuesday.  Guess we’ll see…

Neither being the big ones, but Game Plus and The Descent might prove of interest. To be honest, I’m not in a rush to get either. Issue 12 of The Secret World is about to drop and I’m getting along in Elder Scrolls Online*: and when those are done I’ve got a bit of a backlog. I can always revisit The Witcher: Wild Hunt and Dragon Age Inquisition later.  There’s really not much of a rush, honestly.

*It’s fun, once you actually get to play it (after downloading the double-digit gigabytes’ worth of patches).

Generally speaking, “The default answer to any title question is ‘No’” rule should be in effect, here: Is Dragon Age: Inquisition Withholding DLC For Last Gen Consoles An Ethical Move?  Look, both the PlayStation 4 and the Xbox One both came out in 2013. It is now 2015. Both Sony and Microsoft are getting to the point where the PS3 and Xbox 360 are going to be no longer supported. At some point, gaming companies are going to have to take that into accou… what’s that? Oh, I do all my gaming on the PC. So, yeah, this doesn’t affect me at all; I’m expected to update my own blessed gaming console anyway.

Finally got around to sitting down and playing the new DLC. Pretty cool, so far.  I should do the DLC’s main adventure at some point.

I’ll believe it when I see it.

…fans can now rest assured that there will indeed be more content coming to Dragon Age: Inquisition in the future after Bioware’s Mark Darrah announced that DLC is now officially in development. Darrah, who works as the executive producer for Dragon Age: Inquisition, tweeted to fans to confirm that Bioware is now working on the first DLC add-on.

However, the content is still too early in development for Bioware to reveal details on what exactly the upcoming add-on may contain.

END_OF_DOCUMENT_TOKEN_TO_BE_REPLACED

No, really. I tested this. With SCIENCE. Which is to say, I asked my wife, and she confirmed both the best and the worst Companions without breaking a sweat.  So that’s three data points, right there.