Just for calibration… back in April of 2009 I attended the DC Tax Day Tea Party; and one of the more interesting moments of that day was when a box was found to have been thrown over the White House fence, causing the US Secret Service to pretty much push everybody out of Lafayette Park.  Never knew who threw the box (obviously, nothing in it), could have been an overenthusiastic protester, could have been a Lefty troublemaker, but hey, rules are rules. END_OF_DOCUMENT_TOKEN_TO_BE_REPLACED

@SonnyBunch reminded me of this WaPo story about Occupy DC’s run-in with the cops yesterday; and it’s impressive, in its way.  The final score includes alleged assault of a woman by a man, drunk and disorderly, assault, assault and battery, destruction of government property, resisting arrest, and disorderly conduct; one wonders why they didn’t try for barratry.  Well, to be fair, that’s possibly because every time I look it up the actual definition of the term seems to change.  I was sure that it meant deliberately wrecking boats for the insurance…

[Occupy DC press flack Kevin] Zeese* says the Tea Party lost momentum and power when it got into elections and pushing candidates. If one of their elected candidates sold out, they’re not strong enough to do much about it. He explained that the Occupy movement is years from engaging in electoral politics. “My guess is this is a multi-year movement to shift power,” he said. “That’s going to take a 10-year effort.”

Are you now pounding your head against the nearest wall?

If the answer is ‘no,’ then… just keep doing what you’re doing, boychik.  Thanks!

Well… shed builders, at least.  Seriously, that’s not even close to being a barn.

Moving along: as the link above notes, some of the people ‘occupying’ DC tried to put up a wooden structure today… and, apparently, was not able to get the blessed thing even half-done before the cops finally decided to put this exercise in sustained disdain for property rights out of its misery.  As I understand it, before the end public urination was featured… which is how you know that it was an official Occupation, apparently.  I swear, these people have absolutely no control over their bowels… END_OF_DOCUMENT_TOKEN_TO_BE_REPLACED 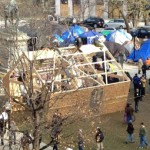 Um.  NO.  You can’t do that.  We have this thing called “property rights” – yes, yes, I know, Marxists consider that to be a swear phrase.  But then, Marxism is intellectualism for stupid people.  Anyway.  STOP this, Occupiers.  There are RULES.

I’ve been doing this for years, and I’ve noticed that it seems that the only times that anybody ever links to Goldberg’s entries is when her opponent is casually disemboweling her arguments.  Latest example. Via Instapundit: this one has Conn Carroll calmly peeling back Goldberg’s remarkable ignorance about the peculiar circumstances regarding federal oversight of DC, complete with long pauses as she frantically attempts to assimilate the new information*.

I’d be pitying, except that I’m not.

This ABC News article is correct enough, as it goes:

On the surface, the “Occupy the Koches: Guerilla Drive-In” event looked like any other “Occupy” movement protest against the proverbial 1 percent of the population who hold the nation’s wealth.

But a confederation of long-established progressive political advocacy groups — the Campaign for America’s Future, Campaign for Community Change, Common Cause, Health Care for America Now and the aptly named Other 98% — were behind Friday’s protest.

For an explanation of what the big deal is about a 501(c)(4) nonprofit corporation, anyway, see here.  Short version: a 501(c)(4) nonprofit corporation, unlike a 501(c)(3) nonprofit corporation, does not have to disclose its donor lists; contributions to it are not tax-deductible.  501(c)(4) corporations are technically not supposed to be majority politically oriented; but there’s nothing stopping one from donating heavily to, say, a Super PAC that is politically oriented (see here and here).  Shorter Moe Lane: 501(c)(4) corporations are great for legally laundering political cash.  Which is fine by me – I’m a full transparency, full disclosure, no-limit free speech absolutist when it comes to political contributions – but it’s insanely hypocritical for group who supported the DISCLOSE Act to be using this system.  And, guess what?  Most of the professional Activist Left supported the DISCLOSE Act.

END_OF_DOCUMENT_TOKEN_TO_BE_REPLACED

A couple of things to take away from this video:

(For those without video access, it starts with Rudy Giuliani at the AFP summit hanging the Occupiers around Barack Obama’s neck; continues with scenes of Progressives Acting Badly by trying to interfere with the free movement of more productive members of society attending said summit; and ends with several actual residents of DC pointing out that the aforementioned progressives are also interfering with their lives, and that they would like the progressives to move out of the way so that they can get home now, please.)

Background: Americans for Prosperity is having its annual summit this weekend, and the Occupy movement decided to send some people over to disrupt it – which is to say, they tried to rush the building.  They failed, of course – the American Left simply is not very good at demonstrations* – but in the process of expressing their inner kindergarteners (the ones that weren’t using actual kindergarteners as props/riot shields, that is) some protesters got hit by a car.  And we almost had an incident over it –  only it turns out that ‘protesters got hit by a car’ actually means ‘some protesters threw themselves in front of a car.’

END_OF_DOCUMENT_TOKEN_TO_BE_REPLACED

The Daily Caller has some entertaining video up of a ‘Occupy DC organizer’ admitting that some of the spontaneous voluntary protesters that he has in tow – ones, not even incidentally, that are more, ah, diverse than the baseline of ‘pasty-faced white twenty-something hipster who’s seriously underwater in his/her liberal arts degree student debt’ – are actually being paid to show up and wave signs in a language that is perhaps not the mother tongue of the country of their birth*.

Let’s go over a few of the things suggested by this video. Kudos for the Daily Caller for sending in a reporter who could speak Spanish, by the way: that was just entertainingly nasty, and probably what forced the admission in the first place. END_OF_DOCUMENT_TOKEN_TO_BE_REPLACED